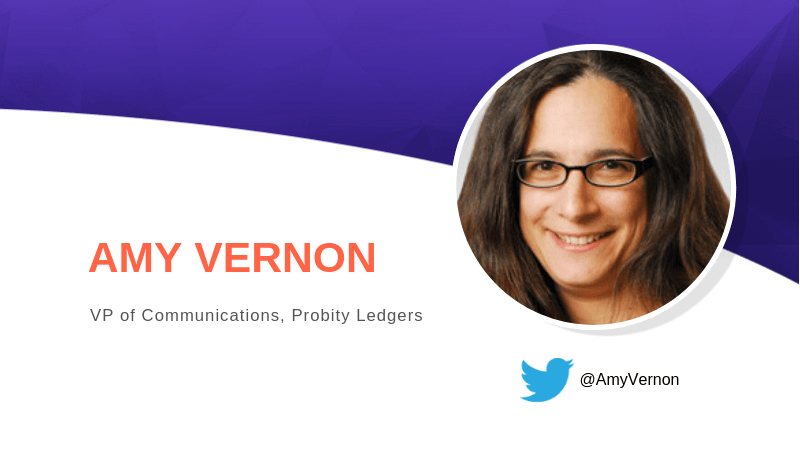 Amy Vernon is a onetime journalist who abandoned the sinking newspaper ship by hopping aboard the social media life raft. She has parlayed her calculated risk into an empire, labeling herself a “digital marketing Swiss Army knife.” She is a prolific writer — on her own website and others — and serves as vice president of communications at Probity Ledgers, a company that works with engineering startups to build secure communication and collaboration platforms. She tells clients to be themselves, but not to get so caught up in themselves that they don’t pay attention to feedback and put it to good use.

You work with startups. What is some good advice that can be applied to almost any startup?

Listen to your users and your community and figure out why they aren’t doing what you want them to do.

Being focused too much on your original idea can hold you back. I think it’s very much tunnel vision. You have to see what you’re working on as a living, breathing thing that will evolve and change, like a child.

Sometimes companies decide how they will change the site and then they do it, but they ignore all the feedback. Users might be saying, “I love using your site, but you’re now making it difficult,” and if you aren’t listening, you might lose those customers.

Should you expect that if something about your site is off-putting to customers that they will tell you about it, or should you actively solicit feedback?

Definitely solicit feedback, but also always be on the lookout for it. Getting good feedback is about making sure you’re listening when people are complaining and not getting defensive about it. Respond to people who say negative things to you and ask them about their experience. Tell them: “I don’t know if I can fix this now, but this is really useful. Can I ask you more questions about this later?”

If people recognize that they’re actually being listened to and that their feedback is valued, even if they start out feeling negative about you, those people can sometimes become your biggest boosters. You showed them you learned something from them and, in the process, made what you were doing more valuable to them.

People want something that holds value for them. If you show them that they provided value to you and you help them get the value for which they were looking, they see you as approachable — almost as a friend.

Download our guide on How Better Customer Reviews Drive Revenue.

How do you avoid allowing the pendulum to swing too far in the opposite direction, making too many changes based on feedback?

A big mistake is seeing new uses for products and trying to accommodate them all at once.

Do one thing well, recognize the other things that it might work for and maybe adapt to that in the future. You don’t want to try to have your product and your platform be all things to all people at the beginning. It can’t. It has to grow into that.

Look for an interest, a need in your community, something you can do better than anybody else and get that out there. But keep note of all those other things. Put them on the roadmap for Stage II or Stage III or Stage IV.

What you put on your social media — personal or professional — necessarily affects your online reputation. Should people avoid expressing political or otherwise potentially controversial opinions on social media to avoid customers — current or future?

We all have opinions. Someone who works with me, or with whom I want to work — they have to respect my views. I have to be me. That is part of my reputation.

Where do you draw the line? When you start attacking people. It’s a fine line because sometimes people are their ideas.

You have to figure out who your clients are. You shouldn’t insult your customers. There have been complaints about authors, in particular, getting too political, but they’re okay with that. I admire that. I don’t know if I would admire it if it was used against me, but I would respect it. Of course, being an author is a slightly different thing.

Some companies wear their religion or their political beliefs on their sleeves, like Chick-fil-A or Hobby Lobby. People with certain belief systems don’t patronize those places, but those places have made a decision that their belief system is more important than those customers, and they seem to do okay.

As long as you aren’t insincere about what your beliefs are and you’re not insulting people, personally and individually, you can probably get away with it. If I had a client like one of those companies, we’d have to sit down and talk about whether it would hurt them. If it did hurt them, would it hurt them enough for them to care? It’s difficult and personal.